Her Alternative movie poster made by Jeremy Ford 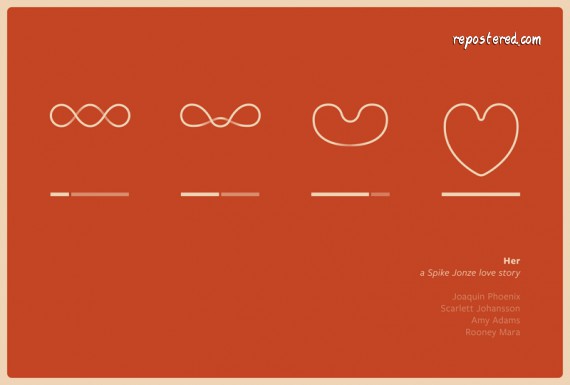 After seeing the new film 'Her,' I was immediately inspired to create a conceptual poster. My goal was to portray the movie's pivotal moment in an abstract and minimal manner, using symbols instead of photography or people. When Joaquin Phoenix's character, Theodore, first installs OS1 on his computer, the loading screen displays a hypnotizing, rotating ribbon accompanied by a progress bar. As the story unfolds, he begins to fall in love with the voice behind the OS's artificial intelligence. In the poster, I used these loading screen elements as my symbols; redefining the ribbon's form to convey love and transformation, two prominent themes in the story. I also noted a prevalence of orange in the film, which I incorporated into the background to communicate a similar tone and mood.